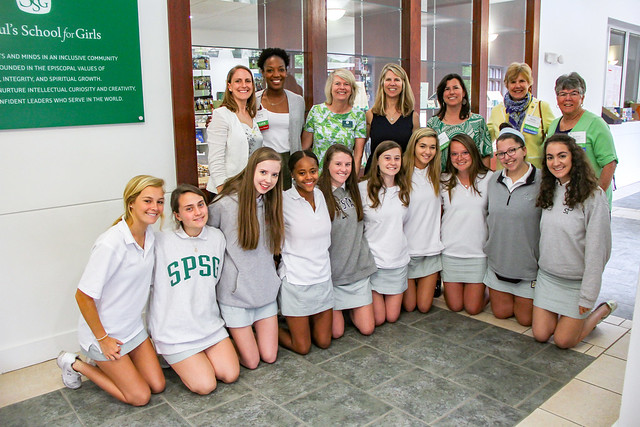 Students in the Women’s History elective at St. Paul’s School for Girls (SPSG) partnered with the Development Office to create a Living History Exhibit on the history of SPSG, which was displayed for the school’s reunion weekend. Beginning with primary source research in the school’s archives, students brainstormed topics of interest, research questions, and initial ideas. Small groups of students then worked to further develop, curate, and build all materials needed for the exhibit using the school’s maker space, including wood plaques, 3D models of the school’s buildings using original blueprints, and lithophane light boxes. Students examined how SPSG has embraced change in many areas of school life over the years, such as in the academic program, student life, and graduation ceremonies, yet it has remained rooted in its Episcopal values of inclusivity and respect. As the students outlined in their class proposal, “The main idea of the exhibit is to express how St. Paul’s School for Girls has changed through the years but has also remained grounded in its values and tradition. The alumnae who return to SPSG for Green and White Weekend will leave the exhibit with a sense of pride in seeing what the schools has accomplished since they graduated.” In addition to the exhibit, students conducted oral history interviews with several alumnae during reunion weekend and created a podcast about SPSG’s history and students’ experiences. Through this project, students developed valuable skills in research, design, collaboration and problem solving, and fostered strong connections to the school and its history.