The National Association of Episcopal Schools (NAES) is an independent, 501(c)(3), voluntary membership organization that supports, serves, and advocates for the vital work and ministry of nearly 1,200 Episcopal schools, early childhood education programs, and school establishment efforts throughout The Episcopal Church.

Chartered in 1965, with historic roots dating to the 1930s, NAES is the only pre-collegiate educational association that is both national in scope and Episcopal in character.

NAES advances Episcopal education and strengthens Episcopal schools through essential services, resources, conferences, and networking opportunities on Episcopal school identity, leadership, and governance, and on the spiritual and professional development of school leaders.

By serving those who serve Episcopal schools, we seek to foster excellence through association. 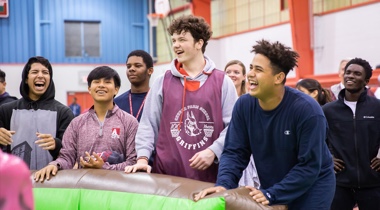 Please consider supporting NAES, and by extension, the work of Episcopal schools around the world! Your donation goes directly to support the work of NAES, and a portion is also set aside to support our members through Outreach Grants. Thank you for your generosity!

Read our mission statement and learn more about how we foster excellence through association by serving those who serve Episcopal schools.

New Publications Available in the Store

Two new NAES publications are now available for sale in the NAES store. “About Episcopal Schools” is a perfect resource for your admissions office to help explain Episcopal identity.

As Dan Heischman retires after 15 years as Executive Director, NAES thanks him for his dedicated service.

Today the Supreme Court released its decision in the case of Dobbs vs. Jackson Women’s Health Organization. Here is the Presiding Bishop’s statement.

NAES is pleased to announce that Farrah Stephenson will be joining the NAES staff as Member Services & Events Coordinator, beginning February 16, 2022.

Monica brings a wealth of experience leading schools, and her depth of knowledge will be of tremendous benefit to all Episcopal schools.

NAES Endowment Fund to be Renamed in Honor of Dan Heischman

In acknowledgment of our retiring Executive Director’s incredible service to Episcopal schools, the Endowment Fund will be renamed in his honor.

Jon Meacham to Speak at Biennial 2022 

NAES is pleased to announce that presidential historian and Pulitzer Prize-winning author Jon Meacham will deliver a keynote address at Biennial Conference 2022 in San Antonio.

Heather Zrubek to Join the Staff of Texas 2036

Heather Zrubek will be leaving NAES to take a new position in Dallas, TX. Please join us in congratulating her on this new opportunity as we wish her a fond farewell.

This official statement from NAES was affirmed and endorsed by the NAES Governing Board on September 16, 2021.

This double-sided, full-color pamphlet and/or poster from NAES explains the meaning of being an Episcopal school and carefully highlights four pillars of Episcopal identity.

Check out the NAES Career Center to browse open positions in Episcopal schools around the country. Members can use the career center to reach thousands of prospective employees.

This mentoring program provides a unique opportunity for new Episcopal school chaplains to work one-on-one with an experienced mentor, both in-person and via video chat.

NAES membership helps schools dive deeper into what it means to be Episcopal. Membership also provides access to a resource library, specific to Episcopal schools.